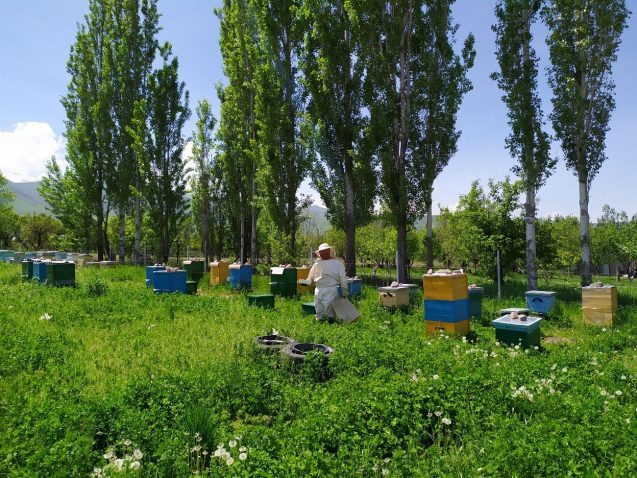 Kyrgyzstan produces some of the best honey in the world, but the industry is in peril as glacier loss reduces irrigation for high mountain pastures and bee populations plummet from uncontrolled pesticide use. Credit: Azattyk Media

On the second day of COP 26 in Glasgow, Kyrgyz leader Sadyr Japarov made an ambitious statement in the framework of the Paris Agreement on climate change asking for help from international organizations. He also mentioned glacier issues which are the most challenging now in Kyrgyzstan. Meanwhile, small glaciers in the country are in danger of disappearing by 2050. The loss of glaciers is having a devastating effect on farmers in the region. Irrigation water supply has declined and pastures have not grown well.

This situation affects not only individual farmers, but also the Kyrgyz beekeeping sector, which is considered the best in the world in terms of honey quality.

Taalaibek Saatov, a 60-year-old farmer, has been beekeeping for four years on the slopes of the Sary-Uzen Chui region, with its rivers fed by glacier meltwater, in one of Kyrgyzstan’s most beautiful places. However, in the last two years, his beekeeping joy has been interrupted. It is becoming more and more difficult to harvest from about twenty beehives, primarily due to climate change.

“Spring was very late in the Chui region this year, and as soon as the bees needed the flowers, the weather past 30 degrees Celsius, and all the field flowers withered. Since May 2021, it has rained not more than four times. My bees suffered from such extreme and unusual climatic conditions.”

In addition, Taalaibek said, farmers are using uncontrolled pesticides to increase crop yields. Those applied to the fields in May and June led to mass extinctions of his bees, following his move to high mountain pastures.

The unique geography of Kyrgyzstan made it possible in the past to produce high quality honey in large quantities. The country has vast high-mountain pastures covered with a variety of honey-bearing plants.

Honey produced in Kyrgyzstan has been recognized at international festivals worldwide as the best organic honey in terms of quality. In 2014, at the 44th International Honey Festival in South Korea, Kyrgyz honey from At-Bashy highlands took first place for quality.

As glaciers melt and the climate changes, some bee farmers have had to move their hives to higher mountain pastures to find enough wildflowers for their bees. Credit: Azattyk Media

As beekeeping in the country is declining from year to year, the world-famous Kyrgyz honey suffers from climate change and soil degradation. The pesticide industry is growing, and the government has not put out any legislation to control pesticide usage. On top of that, extreme weather conditions have not been acknowledged as an issue by the government. In the 1990s, 12,000 honey farms were producing more than 10,000 tons of honey. The number of beekeepers deteriorated to an astonishingly low 1,000, all in total producing only 3,000 tons of honey in a year.

In remote areas, United Nations development programs have been supporting beekeeping in local villages to cope with harsh climatic conditions, while government organizations have turned their blind eye to the issue.

Beekeeper Taalaibek could not hold beehives on the Chui slope for a long time and, this year he had to climb to the top of the mountain looking for wildflower pastures for his bees. However, the drought of 2021 in Central Asia destroyed the blooming grass very early, and he was disappointed in his searches.

“If you go up to the mountains now, everything is yellow and brown,” he said. “When you step on the grass, you see that it has dried up. Usually, in May, Chui’s fields used to bloom until July, and we didn’t need to climb up mountains until then. Then in July and August, when the mountains blossomed, migration of beekeepers used to begin. We needed to arrive in the mountains early in June this year. But there weren’t any flowers on the mountain pastures.”

Now autumn has come to Kyrgyzstan, but Taalaibek will spend the winter thinking about how to find a blossoming pasture or field next spring and how to keep his beloved bees.

Beekeeping is essential for the livelihoods of Kyrgyz people and pollination of the wild, native plants in the mountains of Kyrgyzstan. It is devastating to see how climate change and pesticide usage affects even one of the most remote areas in the world. It is essential to address these issues to move forward in sustainability.