Barisal and the Eastern Channel

We finished our line of magnetotelluric (MT) stations along the Pusur River to map the distribution of fresh and saline groundwater. This electromagnetic geophysical method can distinguish them because saline groundwater is much more electrically conductive. A preliminary look at the data is consistent with there being fresher water beneath the shallow saline groundwater here. We then headed to Barisal and the Tetulia Channel farther east where the water is fresher. It took an entire day to traverse the winding channels of the Sundarbans Mangrove Forest. 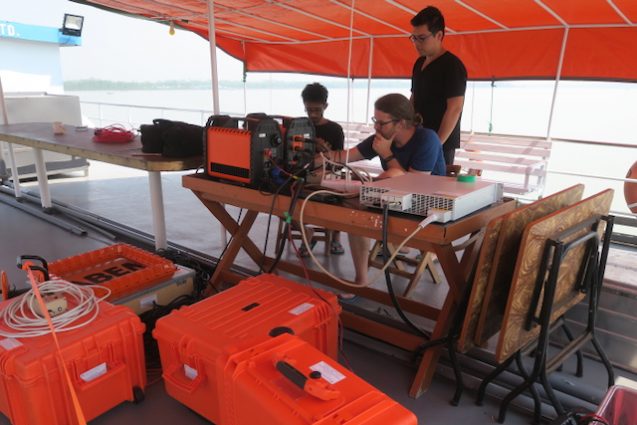 Kerry, Huy, and Shohan testing the TEM equipment during the transit. We will tow this system behind the boat later in the cruise.

Where we emerged from the Sundarbans at Sharankola is close to where I have a GPS station that stopped working. The plan was for Sanju and me to go there via our speedboat and then rejoin the Kokilmoni. However, it was once again very foggy, so instead we went to the ghat (dock) to get motorcycle taxis to cover the 4 km to the site. Masud and the captain came along as well. Since it was early Friday morning, taxis were scarce, so Sanju and I shared one, while the others continued waiting. 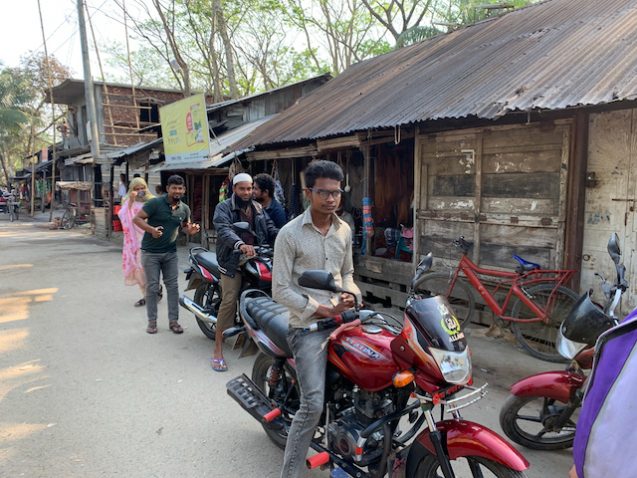 Some of the motorcycle taxis we used to get to our GPS site.

When we arrived, Bacchu, who watches over our equipment, met me with big hugs. He unlocked the school that hosts the GPS and we went to work swapping the old GPS unit for another one. After some checks, and fiddling with the modem, which had trouble connecting to the network at first, we left. We had tea at a stall before extra motorcycles arrived for our caravan back. 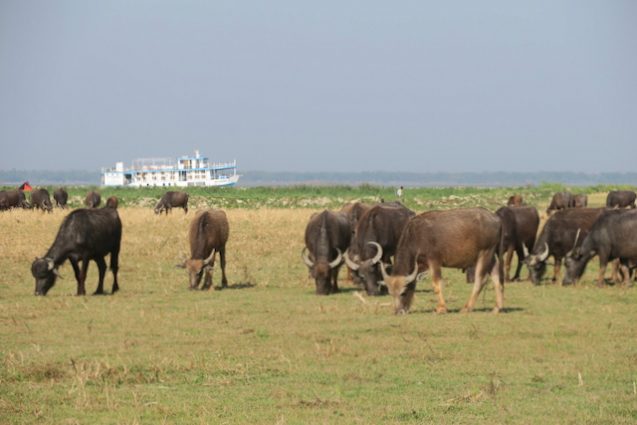 Water buffalo grazing on an open field that is perfect for deploying the MT gear. The Kokilmoni waits in the background.

We spent the rest of the day continuing on to Barisal where Hasnat and his student joined us, while Sanju and Shohan left us. At Barisal, the Kokilmoni refueled and reprovisioned. The next morning we began the transit to our first station at 5:45 am with no fog. 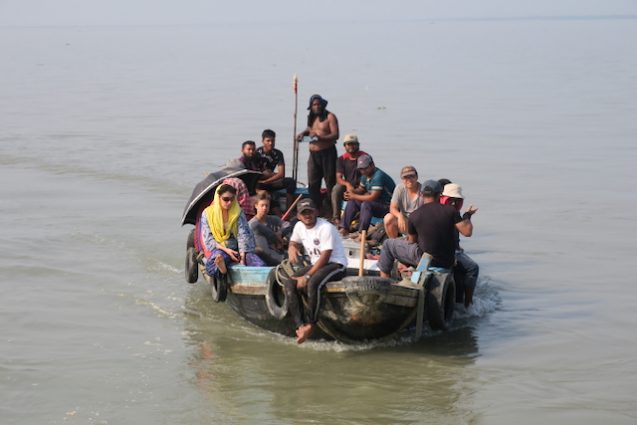 The country boat returning from another successful MT deployment.

While our maps show very little bare ground, we found that the chars, as sandy islands are known, were covered with many grassy fields. Although we saw some crops growing, such as watermelons, squash and peas, many areas had cows lazily grazing. Seeing cows grazing was a good sign. It meant that the land had not been planted with vegetable crops but was still fallow. It also meant that some of the green areas on our satellite maps were good for deployments. 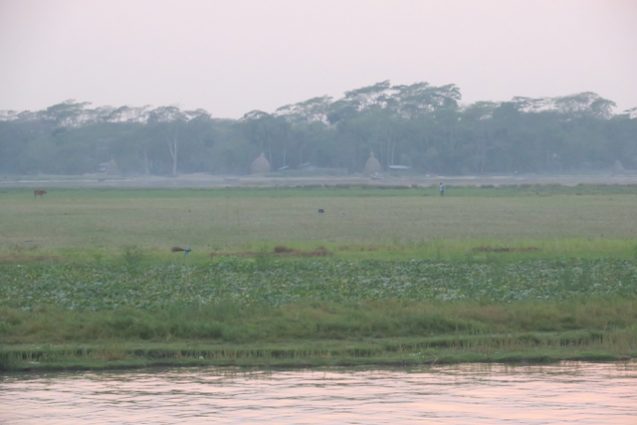 The black garbage bag in the middle of the open field contains the MT recorder and its battery while the magnetometers and electrodes are buried in the surrounding field.

We are developing a new protocol for finding sites. We pick out an area that looks promising about 5 km downstream from the last site. Then, as we approach it, Kerry and I go to the ship’s bridge and look for promising sites. Sometimes when we visit them, they are too wet and we need to shift to a different site. We have the luxury of picking and choosing because we have become so efficient at installing sites. 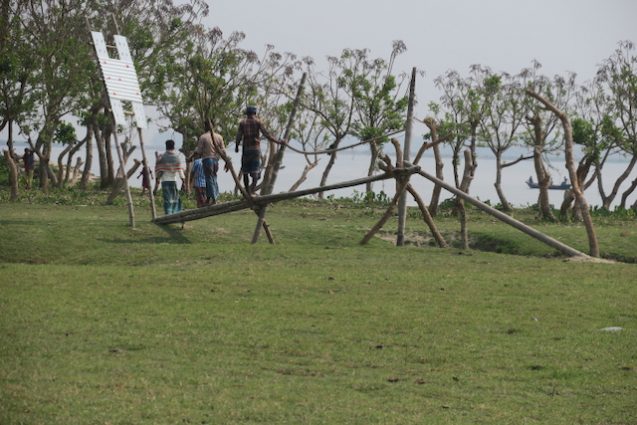 People crossing over a bridge made from Betel nut tree trunks. We sailed around with the country boat rather than carry the equipment across.

On the flat open chars, we can walk out to bury the electrodes 50 m from the recorder in the north, east, south and west directions. Digging holes to bury the 3 magnetometers is also easier in the sandier soils on the chars. The ship’s crew does much of the heavy lifting and carrying, and digging. Kodals, essentially large hoes, are much better than shovels for digging trenches for the horizontal magnetometers. The post hole diggers we brought are great for the vertical magnetometers. We can now install a station in less than a half an hour. Sometimes arranging a watchman for the overnight deployment takes longer than the installation. 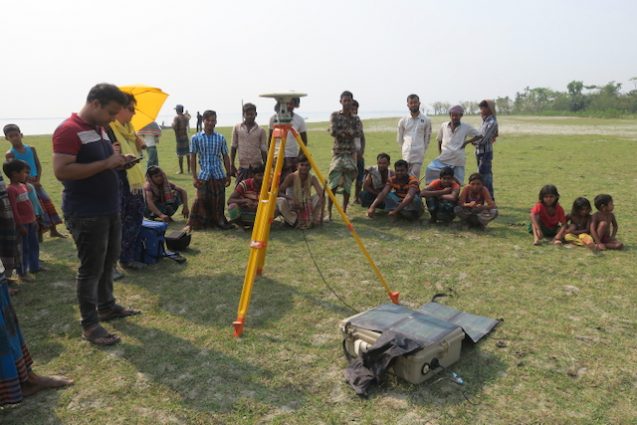 I set up a campaign GPS, now with a proper tripod, each day to get precise elevations for the gravity measurements that Céline is making.

For picking up the instruments, we split into two teams. The speedboat picks up the two farther sites and the Kokilmoni picks up the two nearer sites. We have now been able to deploy four instruments a day for two days in a row for the first time — and had enough daylight leftover for a swim call. 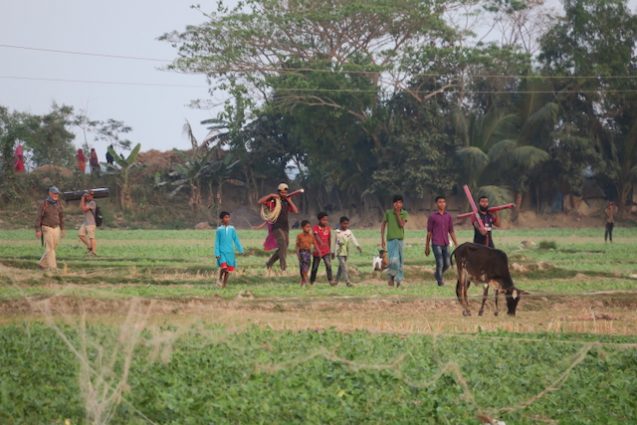 Carrying the parts of the MT system back to the boat after retrieving it in the morning. We pay someone to guard it each night.

However, just when we felt that we were on a roll, Cyclone Asani started forming in the Indian Ocean. It is well to the south of us, forming near the Andaman Islands and expected to make landfall in the Irrawaddy Delta of Myanmar. So far, only a little increase in winds. Still, the Kokilmoni is playing it safe and anchoring each night in protected channels to keep us safe. Then they start sailing at 5:30 am to get us back to position for the day’s work. 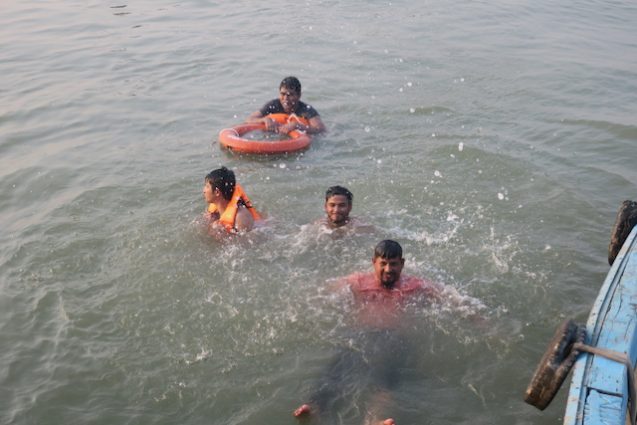 Enjoying a swim call after an early finish to the day. The life preserver is tethered to the ship for safety.

As we worked our way south, it became harder to find good sites. The chars here are too low and wet for our purposes. On the more stable land, we sometimes have to walk a long way to find a good location. For our last site on March 21, we ended up stopping at a ghat (dock) and explaining what we were doing to the townspeople and walked out to their freshly planted fields to deploy using some fallow patches and the raised borders between the fields. Since this procedure takes longer, we finished only three sites with the last as the sun was setting. We are also followed by lots of kids and many of the villagers, attracted by what we are doing. Still, it is nice to walk through villages, something we have had little of traveling by boat. 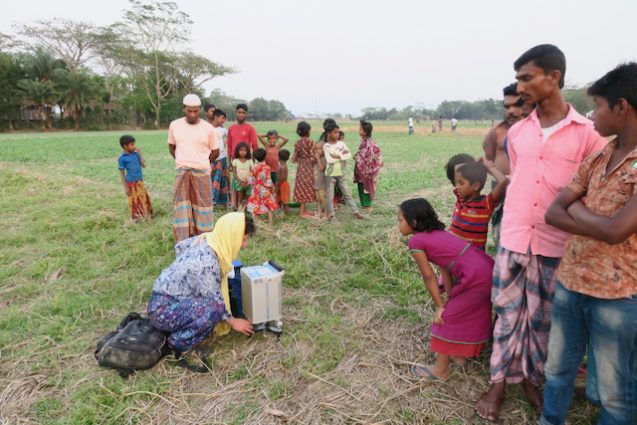 Céline making a gravity measurement while a crowd of villagers looks on.

Even with the changes due to the cyclone and changes in finding appropriate sites, we are all quite happy with the progress that we are making. 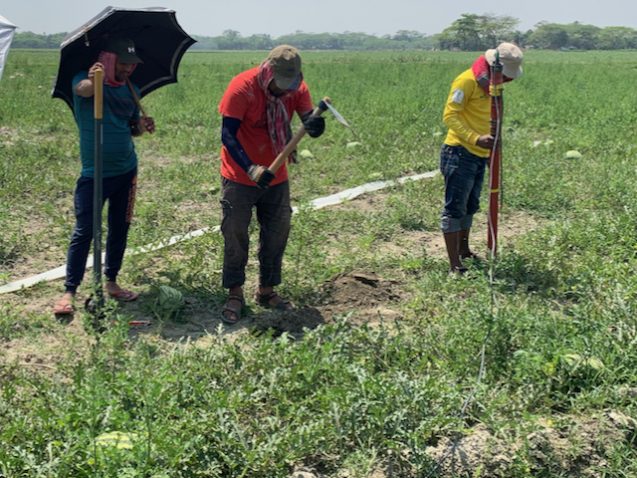 Deploying in a watermelon field while being careful not to injure any of the plants. 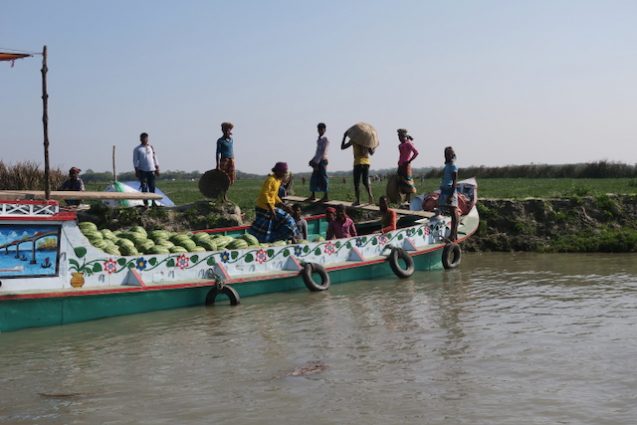 A boat being loaded with ripe watermelons to be taken to market.