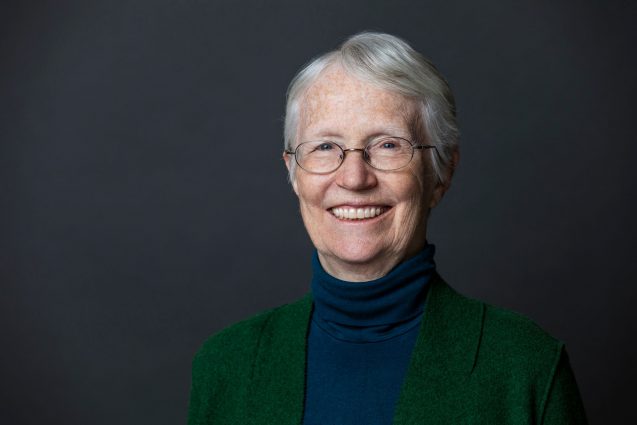 Climatologist and agronomist Cynthia Rosenzweig has been named the 2022 World Food Prize Laureate for her pioneering work in modeling the impact of climate change on food production worldwide. Rosenzweig is a senior research scientist at the NASA Goddard Institute for Space Studies and an adjunct senior research scientist at the Columbia Climate School.

The World Food Prize Foundation’s prize recognizes individuals who have increased the quality, quantity, or availability of food in the world. The $250,000 award honors Rosenzweig’s achievements as the founder of the Agricultural Model Intercomparison and Improvement Project (AgMIP), a transdisciplinary network of climate and food system modelers from developed and developing nations. AgMIP is dedicated to advancing methods for improving predictions of the future performance of agricultural and food systems in the face of climate change, providing the evidence base for effective food system transformation. Her leadership of AgMIP has directly helped decision-makers in more than 90 countries enhance their resilience to climate change.

Rosenzweig is Columbia University’s third World Food Prize Laureate; the previous two were Pedro Sanchez in 2002 and Daniel Hillel in 2012.

“I am honored to receive the World Food Prize this year, as food systems are emerging at the forefront of climate change action,” said Rosenzweig. “Climate change cannot be restrained without attention to food system emissions, and food security for all cannot be provided without resilience to increasing climate extremes. I salute the modelers around the world in the Agricultural Model Intercomparison and Improvement Project for their tireless work helping countries to achieve food security both now and in the future under changing climate conditions.”

Alex Halliday, founding dean of the Columbia Climate School, said that “From the beginning of her career in the 1980s and continuing to the present day, Dr. Rosenzweig has been and is the primary ‘mover and shaker’ for not only understanding how the changing climate will impact food and vice versa, but also for mobilizing the research and stakeholder communities to devise evidence-based solutions to climate challenges throughout the food system.”

Rosenzweig realized early on that​ ​climate​ ​change is one of the most significant, pervasive​ ​and complex challenges​ ​currently facing the​ ​planet’s food systems. She completed the first​ ​transdisciplinary model projections of how​ ​climate change will affect food production in North America and globally, and she was one​ ​of the first scientists to document that climate​ ​change was already impacting the cultivation​ ​of our food supply. Now a senior research scientist and head​ ​of the Climate Impacts Group at the Goddard Institute for Space Studies (GISS), part of NASA’s Goddard Space Flight Center, Rosenzweig​ ​started her career as a farmer growing vegetables and fruits and raising chickens, goats and pigs. This experience was where Rosenzweig fell in love with agriculture and realized she wanted to spend her career in this field. Her​ ​research​ ​centers on helping farmers​ ​to plan and implement​ ​groundbreaking mechanisms that foster​ ​resilience to climate change. Her early work contributed​ ​an important methodological breakthrough in early climate change impact assessments and​ ​established the foundations for current work in this field.

“With the urgent need to factor climate change into decisions ranging from crop breeding to national agricultural policies, the evidence base from Dr. Rosenzweig’s work is increasingly critical for feeding humanity,” said Ruth DeFries, co-founding dean of the Columbia Climate School.

Beginning in the early 1980s, when scientists were asking, “What’s causing climate change?” Rosenzweig was asking, “What will it mean for food?” She completed the first projections of how climate change will affect food production in North America in 1985 and globally in 1994. Her early work was an important methodological breakthrough in the beginnings of climate change impact assessment and established the foundations for current work in this field.

Rosenzweig has also been and important force in shaping Columbia University’s climate research over four decades. She co-founded the Center for Climate Systems Research and was instrumental in launching the International Research Institute for Climate and Society. She is currently helping to develop Columbia Climate School’s food systems research pillar.

A native of New York, Rosenzweig also served as co-chair of the New York City Panel on Climate Change, and following Hurricane Sandy in 2012, she led the team that developed new climate projections that were the basis for the city’s $20 billion rebuilding and resiliency implementation plan. She was recently listed as one of the top 100 climate change scientists globally by Reuters.

The World Food Prize award announcement was made during a ceremony hosted by the U.S. Department of State on May 5. U.S. Secretary of Agriculture Thomas J. Vilsack gave remarks, and Barbara Stinson, president of the World Food Prize Foundation, announced Rosenzweig as the 2022 Laureate. Rosenzweig will officially receive the prize in a ceremony in October.

Secretary Vilsack said, “Her work has been instrumental in building resilience in the U.S. agriculture sector.”

Congratulations on this incredible work. You’re truly an inspiration!